This group, sub-group, or group system has been declared INACTIVE.

This means any member in the group/the group leader has not been active for 5 or more months. After a year, these pages will be categorized for deletion. 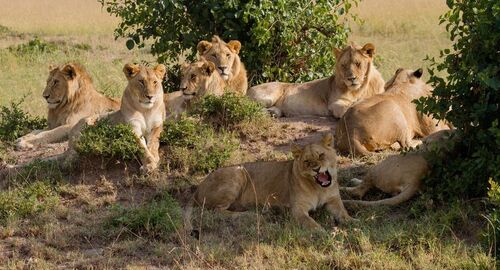 "We once were creatures only mentioned in the stories of our descendants, the warrior cats. But now, we are legends reborn."

Welcome to Appondale. You quickly exit your lame shelter underneath a large acacia tree, watching as the home of acacia branches is destroyed by the ever-hungry forest fire. I have to get away as fast as I can! you think, abandoning your only place to stay for the rest of your life.

Not stopping to think anymore, you run as far away as you can from the burning tree until you feel like your paws will fall off. Finally, you see a lush watering hole!

Not pausing to think about the giraffes who were craning their long necks to take a drink, you ran to the watering hole and viciously lapped up the water. It was hot in this area, and you couldn't seem to go another day without drinking.

The giraffes gasped when you came, taking a step back. Feeling guilty, you looked up at their gaping orange mouths. "Sorry. Am I not alloed to drink here?" you ask.

"No," one giraffe said, backing away, "it's fine." Then, all of them screeched and ran. You hung your head, feeling like a threat to the animals in this area. But when you turned around, your eyes went wide. It was then you realized that the giraffes had run not from you, but from a stampede of wildebeests.

Now you, too, ran from the large-footed animals, looking back once. When you looked forwards again, you saw a lioness and her cub, limping across the canyon and trying to get to the other side. They wouldn't be fast enough to escape the stampede if they kept up with this pace. You sped ahead of the tramplers, nudging the lioness and cub aside.

They were heavier than you thought, so you had to nudge them harder. The old lioness picked up her pace, dragging her cub with her until they were at a nook in the canyon's walls. The wildebeests were just behind you, but you shoved the lions in before the animals could come. However, they ran carelessly over your ankle.

"What's your name?" you ask, avoiding the subject. "And what makes you special compared to the others of this LeopardClan?"

"I, Fleetfoot, won them a river," she says confidently, as if she'd been waiting forever for you to ask that question. "I helped build their base."

Not expecting that answer, you ask even more quietly as Fleetfoot turns to crouch towards a rabbit, "Can I join?"

"Have you pride?" Fleetfoot murmurs, diving into a nearby bush and then returning with a rabbit dangling from her claws. "Are you brave and worthy? Did you catch a LeopardClan warrior in action? Do promise to not fight and hunt only for yourself, but for the good of LeopardClan as well?"

"Yes," you respond to the first question, struggling to remember all the others. "I'm brave, worthy, and prideful, and I watched you in the trees--"

"More like I saw you in the trees," Fleetfoot muttered.

You continue, ignoring Fleetfoot. "I promise to help LeopardClan."

"If you believe everything you just said, you can follow me." Fleetfoot flicks her tail and walks up a slope where there are pine trees, closely clustered around each other, then she stops as if remembering something she had forgotten.

"But first," she says, looking a bit embarrased, "Let's continue to hunt, shall we?"

7/30/19: The page's construction begins with no current members.

Our code differs slightly from the warrior code for cats. Here is the original code:

1- Defend your Clan, even with your life. You may have friendships with cats from other Clans, but your loyalty must remain to your Clan, as one day you may meet them in battle.

2- Do not hunt or trespass on another Clan's territory.

3- Elders and kits must be fed before apprentices and warriors. Unless they have permission, apprentices may not eat until they have hunted to feed the elders.

4- Prey is killed only to be eaten. Give thanks to StarClan for its life.

5- A kit must be at least six moons old to become an apprentice.

6- Newly appointed warriors will keep a silent vigil for one night after receiving their warrior name.

7- A cat cannot be made deputy without having mentored at least one apprentice.

8- The deputy will become Clan leader when the leader dies or retires.

9- After the death or retirement of the deputy, the new deputy must be chosen before moonhigh.

10- A gathering of all three Clans is held at the full moon during a truce that lasts for the night. There shall be no fighting among Clans at this time.

11- Boundaries must be checked and marked daily. Challenge all trespassing cats.

12- No warrior may neglect a kit in pain or in danger, even if that kit is from a different Clan.

13- The word of Clan leader is the warrior code.

14- An honorable warrior does not need to kill other cats to win his/her battles, unless they are outside the warrior code or it is necessary for self-defense.

(SOURCE: Secrets of the Clans by Erin Hunter, illustrated by Wayne McLoughlin)

Even though we are leopards, we believe in StarClan and the Dark Forest, and shall become part of them at our deaths.

For a kit who wishes to be a medicine cat apprentice, they must go to their initiation at the Mooncrystal. For medicine cats, contact with StarClan by pressing your nose to the still-shining crystal to receive your dream.

There is a specific dress code. It is there to keep us looking natural and realistic.

ANIMAL: Lions (male), cougars (adult females, or use a shrink potion if you are a cub)

BACK: Firefly friend, none

You may ASK if a certain item can be added to the dress code in the comments. It's not likely that I will accept, but feel perfectly free to ask!

Retrieved from "https://animal-jam-play-wild-clans.fandom.com/wiki/LionClan_(Vacant)?oldid=4081"
Community content is available under CC-BY-SA unless otherwise noted.